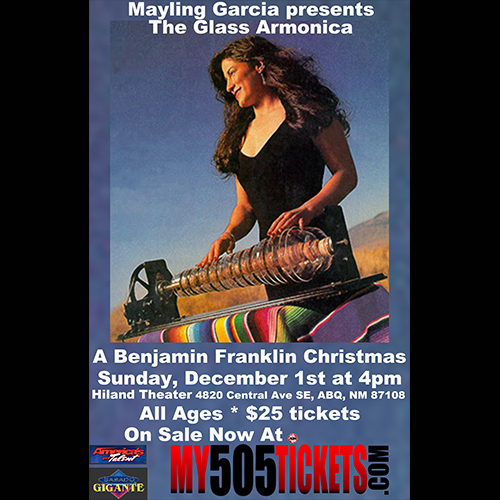 Tickets for this event are not available.

Get your tickets NOW to see Mayling Garcia!

Mayling Garcia is one of 10 people in the world who play Benjamin Franklin's glass armonica. It is a glass piano made of crystal quartz and 22 karat gold. She learned to play via telephone from the German maker Gerhard Finkenbeiner. Mayling has appeared on the largest television shows in the world. She has appeared on Sabado Gigante International 5 times. It is seen by 120 million people in 52 countries every Saturday night. She was the first person to call Americas Got Talent with her talent. She appeared on the 1st season. Regis Philbin introduced her live on NBC. She has played for Simon Cawell, Heidi Klum, Mel B and Howie Mandell. Tyra Banks introduced her on the show in 2017. Mayling has also appeared in People Magazine.

Mayling Garcia takes the stage at 4pm sharp on Sunday, December 1st! You won't want to miss this incredible performance in her home town at the Highland Theater in Albuquerque! Christmas with Benjamin Franklin! 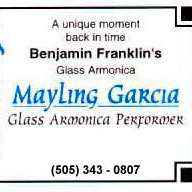 Online ticket sales for this event have ended. Please contact the Box Office for more information.

Welcome to the New MyNorthTickets!

We’re excited to bring you a brand new experience on MyNorthTickets. We’ve added new features, updated our design and have made the site intuitive and easy to use. If you have any questions, comments or feedback, visit our contact page. We would love to hear from you!

Get the POWER of AGM's 7 Albuquerque Radio Stations behind your event and organization!

Partner with AGM to get access to the only ticketing platform that has a monthly audience of over 1.5 Million in the greater Albuquerque area!

LEARN MORE about our LIMITED TIME LAUNCH PACKAGE and the exposure we bring at NO COST TO YOU!